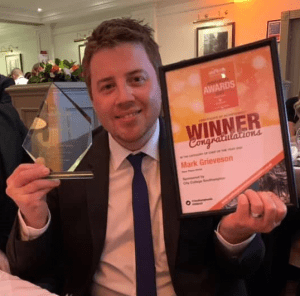 The Chef of the Year award, was open to chefs of any of the businesses in the Southampton Hoteliers Association. The judging panel assessed key areas of each nominees skills, culinary knowledge, dedication to team work & pursuit of excellence.

Mark, said of the award: “I was very honoured & humbled to even be nominated, but to win the category against a tough field of finalists is particularly pleasing.” Mark went on to say “The win is not just for me, but reflects the hard work done by my kitchen team & the whole New Place hotel team.”

Richard Powell, General Manager said: “Mark deserves this award so much, he is a wonderful chef with culinary skill as well as flair. The hotel is always receiving warm  accolades from guests about the food & that is all down to Mark & his team!”

It was not the only celebration for New Place Hotel on the night who also won the events Community Award, sponsored by commercial radio station Wave 105 & voted for by their listeners.