What’s in an Award? 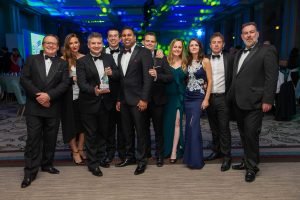 Why does New Place Hotel have a renewed focus on awards? It is clear to see that the hotel has done well in recent competitions, being recognised by judging panels for a wide variety of awards.

Most recently we were delighted to win ‘Team of the Year’ at The News Business Excellence Awards and are looking forward to attending the JP South Awards to see how we do at the regional level that we are automatically entered into.

But why do we do all this?  We know that award organisers and sponsors list many benefits from winning awards, but is it true? Or is all the effort involved just for a few industry people to have an evening of networking, while the organisers make money taken from ticket sales?

I must admit to being naturally cynical, I can be suspicious of things that are sold with no downsides & too good to be true and I can also be over-analytical, but following the last twelve months at the hotel I have to say ‘YES’ awards are very much worth taking seriously.

Apart from the fact they are a tremendous boost for individuals, teams and businesses that are shortlisted and awarded, I actually find it a useful business exercise for three reasons:

Firstly, reflecting on recent activity and explaining its success when writing an award entry is really useful to help identify things that should be repeated and built upon.

Secondly, handing in an account of your work to a group of complete strangers who are highly experienced in the industry, completely outside or usually a mixture of both is like getting free consultancy or an audit.  Their engagement, feedback and praise are just as useful, arguably more so, as actually winning an award.

Finally, I like to look at and talk to the other businesses involved in an awards event. I often get inspired by other hotels and businesses when I look at websites, read about them or meet people who work there, and I may not have taken the time to notice them without an awards organisation highlighting their recent success. In that way, it provides interesting, and often useful, professional insight.

I believe that both the work involved in preparing for the awards and New Place Hotel’s profile being raised in a number of different arenas as a result of praise and accolades in the past year have made a valuable contribution to our recent success– a growth of 17% in revenue and 42% on the hotel’s bottom line in the past financial year– which has been only the second since the property began its chapter with new owners.

So in conclusion, we will continue to enter awards where we think we have something relevant and exciting to contribute and look forward to meeting all those who will be doing the same.